The Galleria Vittorio Emanuele II, named after the first king of the Kingdom of Italy, was originally designed in 1861 and built between 1865 and 1877. It is a double arcade intersecting in an octagon covering the street connecting Piazza del Duomo to Piazza della Scalla in the center of Milan. 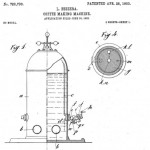 In 1901, Milanese Luigi Bezzera patented his innovative process for preparing espresso coffee. It was titled “Innovations in the machinery to prepare and immediately serve coffee beverage”. This was both, the original espresso coffee machine and the first machine to be exhibited at Fiera Milano.